What is an App Prototype? 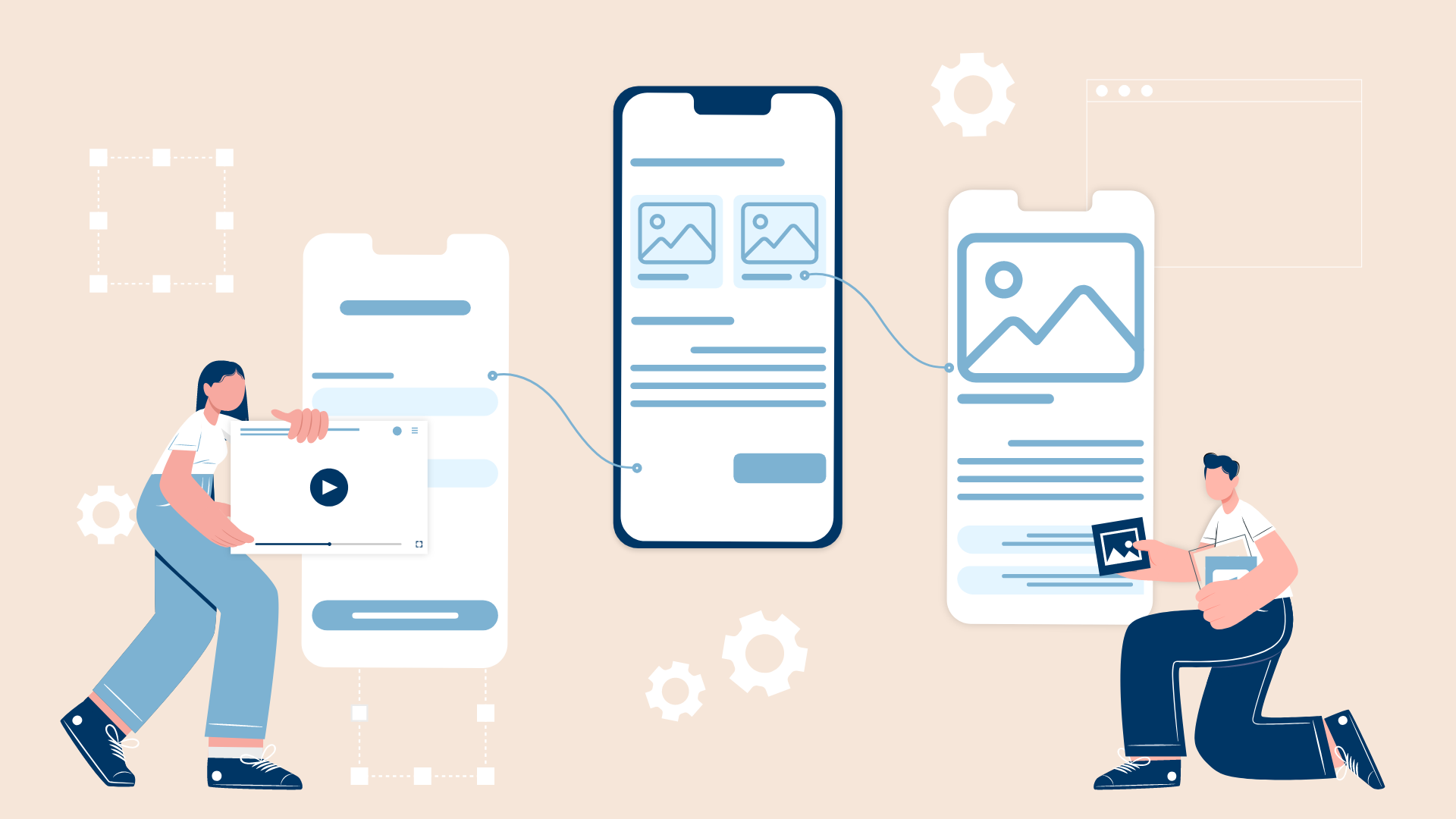 An app idea can be created by anyone. But you won’t be able to convince investors or win over key stakeholders at your firm with just your mobile app ideas.

You’ll have a big advantage in these situations if you develop an app prototype.

Making prototypes demonstrates your commitment to the project to stakeholders, investors, and possible partners. Additionally, it allows everyone the chance to experience your software development project rather than just reading or hearing about it.

Everything you need to know about mobile prototypes and how to create them is covered in detail in this comprehensive tutorial.

What is a Mobile App Prototype?

Prototypes for mobile apps are unfinished models that resemble finished products. App prototypes show the core functionality and design of the app but do not include any functional code.

App prototypes can be made in a variety of sizes and shapes. Some are merely rough sketches, while others are high-fidelity, clickable, or interactive prototypes.

At each level of the app design process, you can produce a variety of prototypes. An initial draught of your idea can be a hand-drawn diagram on paper. When developing an app, these kinds of prototypes are essential since they let your design team swiftly iterate on concepts.

Digital prototypes that demonstrate the features of the app are frequently created from low-fidelity prototypes. These prototypes display the app’s basic structure and big-picture vision.

Prototyping has a variety of benefits during the development process. The following are the main justifications for developing a prototype:

How to Create a Mobile App Demo

It’s time to make a prototype for your mobile app now that you know what one is and why it’s so crucial. To get going, just adhere to the basic instructions listed below:

A prototype for an app is made in the same manner as an app in its initial stages. You must determine the issue that your app will address.

This could sound very basic to some of you. However, you’d be shocked at how many individuals create an app idea simply because it sounds great, even though it doesn’t genuinely solve an issue or meet a demand in the market.

If you want to propose an app idea to investors, partners, or a board of directors, they will quickly reject it if it doesn’t address a need in the market or an issue.

Do not attempt to rush or skip this step. The foundation for every part of the development project will be laid by taking the time to properly grasp the aim and function of your app.

Given that the issue has been identified, you must now think of features to solve it. You are, in essence, specifying the functionality of the app.

Start the brainstorming phase by making a list of all possible features for the app. But then you’ll want to narrow the focus specifically to functions that serve as a core requirement for the app to work.

Don’t go too far with this. Yes, certain features “could” be present in any program. Does the program need this feature for the app to function, though?

If the response is negative, you can move on to the prototype stage right away. You can always revisit this concept in the future. PrBeforeorrying about all the displays, focus on no more than five core features and design your prototype around those aspects.

It’s time to take your concepts and write them down. The first stage of the design process,doesn’ton’t yet call for the use of a prototype tool.

Don’t go too far with this. Yes, certain features “could” be present in any progrprogramyou truly need this feature for the app to function, though?

If the response is negative, you can move on to the prototype stage right away. You can always revisit this concept in the future. Before all the displays, focus on no more than five core features and design your prototype around those aspects.

It’s time to take your concepts and write them down. The first stage of the design process does yet call for the use of a prototype tool.

Create a Wireframe from Your Sketch.

By producing digital assets, you can now take your sketch and advance it. To expedite the process, start with a low-fidelity wireframing tool.

Prototypes and wireframes are frequently confused. Despite their similarities, the two terms are similar.

To construct a prototype, you’ll need wireframes, which will outline the app’s fundamental structure and layout. However, a prototype is far more sophisticated.

Transform Your Wireframe Into a Mobile App Prototype

As referenced above, models wireframes into something further developed. You’ll need to utilize a prototyping instrument to assist you with this step, and we’ll examine a few choices to not g from now consider.

While your wireframes can be shipped off your Coto leagues for criticism, the main interest group of a model is a piece unique. Models are better for imparting to leaders, chiefs, financial backers, or even possible clients.

The post model the application feels genuine for any individual who could have a personal stake in the undertaking. You can likewise hand a model off to your designers, so they have a superior feeling of what they’re working toward.

While a wireframe may very well be utilized inside, a model is something that you can flaunt. You can add it to your site or even offer it via web-based entertainment as a method for building publicity for your application and begin advancing it before send off.

Making an application model is simpler while you’re utilizing a prototyping device. While there are different devices available that apparenomparative arrangements, the accompanying five choices are a decent spot to begin your pursuit:

Figma is marked as a cooperative point of interaction plan arrangement. It’s an electronic illustrations proofreader and prototyping instrument that is an industry number one among the plan local area.

This instrument is truly valuable during the beginning phases of application improvement while you’re working cooperatively with a group for conceptualizing. You can exploit its online whiteboard for workshopping thoughts before tbeforenating them with a model.

Then you can take those thoughts and have them readily available as you carry the plan work from ideation to execution.

Figma even offers a free prototyping device that you can use to plan a versatile application.

Moqups is an across-the-board for wireframes, UI plans, and aplansodels. This prototyping device has been utilized by multiple million individuals to make a model.

The stage accompanies out-of-the-container stencils for various use cases and plans coplansents. This incorporates a versatile le application plan for the two iOS and Android.

You can utilize a broad rundown of textual styles and styling choices to rejuvenate your mockups and effectively intuitive pictures to the model to accommodate your marking.

Plans for solo clients start at just $13 each month.

Tecoreng is an application building stage and application advancement administration under one rooftop. It’s not typing device in the conventional sense, yet you can in any case utilize Tecoreng to make a model.

This is the way.

Tecoreng Plus is our comprehensive plan and advancement administration. Our group can take your thought and transform them into a reality through each step of the cycle, including pre-send-off and post-send-off drives.

During these beginning phases, we’ll make a wireframe and ultimately transform that wireframe into a model before we begin building anything. This help is great for any individual who would prefer to give the application improvement obligations to a believed advancement accomplice.

You’ll have the valuable chance to survey the wireframes and models before any improvement starts, guaranteeing everybody is in total agreement before the application gets constructed.

Justinmind is a free prototyping device and UI plan stage for portable and web applications.

You can utilize it to change your wireframes into a completely intuitive model.

Dissimilar to a portion of different instruments on our rundown, Justinmind isn’t an electronic arrangement. You truly do have to download programming to your PC to utilize Justinmind to make a model. It’s accessible for both macOS and Windows machines.

The fundamental arrangement is free always, and premium memberships for cutting-edge connection and configuration start at $9 per client each month. To make a portable application model, Proto.io makes it conceivable.

Making a model is a pivotal move toward the beginning phases of application improvement.

You can make a model on your own by following the means in this aide and utilizing one of the prototyping devices on the rundown above.

On the other hand, you can connect with Tecoreng and allow us to make a model for you.