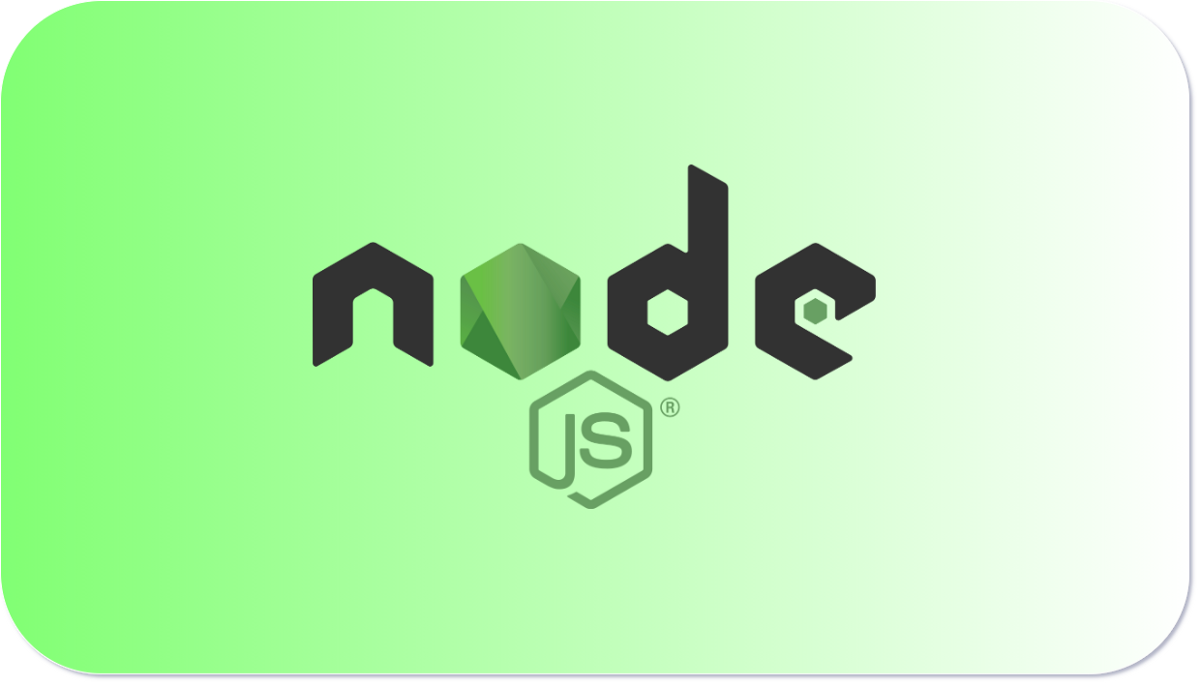 Technical Core Engineers is the best Node.js development company. Node.js allows us to easily build high-performance applications. Node.js met all our expectations, and it helps to simplify work. It is easy to modify and maintain. With Node a group of small applications is developed instead of one large application also it is possible to merge web and backend developers into one unit which makes development efficient. It’s perfect for handling lots of requests that are I/O driven and scales very nicely.

When you’re developing an application or software, choosing a backend technology is a crucial task. If you’re a fan of the popular JavaScript programming language, you used to have to find another option for server-side development. With Node.js, full-stack JavaScript development is now possible.

Node.Js development trends we will describe in this blog and also try to easily understand and helpful content. So Let’s Get Started!

A Quick Overview of Node.Js

Node.js has become a robust framework of all times. With its increased popularity among developers, soon it will lead the development industry and empower 60-70% of web apps. The best part about Node.js is that it is not at all costly and anyone can have access to work on it. Moreover, one can easily learn to operate on it. In this blog, we shall read about the top Node.js trends for this year that will rule all over the world.

Furthermore, we will discuss bout the most used frameworks among developers worldwide, as of 2022. We will display the graphical representation below. And equally important, visitors can easily understand the topic 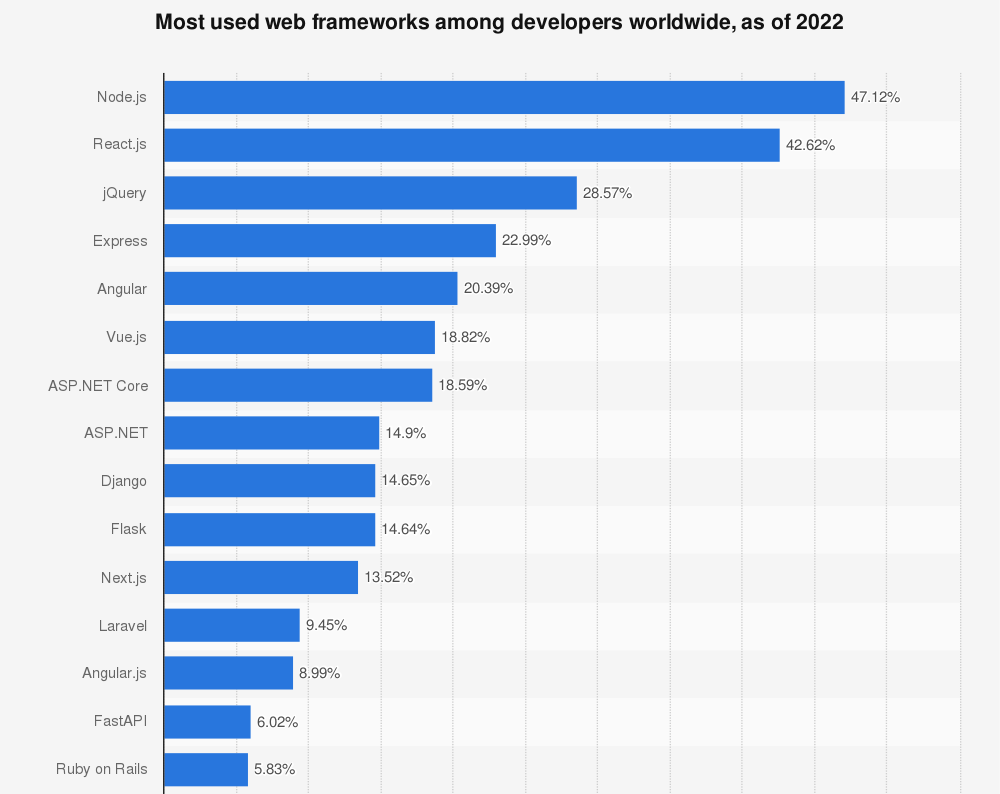 It is easier to learn if you have some experience in JavaScript and backend development. To ease down the development tasks furthermore, NodeJS has libraries that can be used to develop applications, so let’s have a look at some prominent NodeJS libraries.

The framework is a highly simplistic and user-friendly full-stack node.js framework that is highly compatible with iOS, Android, or Desktop. The application development through Meteor.js is quite simple and easy and at the same time carries the capability to serve large projects.

A number of full-stack developers have been working on the framework to help the organizations grow and develop and is now the fourth most popular and used framework in India.

Here’s a fast, popular, and flexible platform that offers a powerful collection of features for the web as well as application development for mobiles.

Express.js helps developers to work efficiently and quickly without much hassle. It has an open-source community and is comparatively simple to learn and get expertise at. It is also ranked as the 5 useful backend frameworks to work upon among the top 10k other frameworks.

A framework that allows an application to be built that is highly scalable. It has a strong base of TypeScript and is highly inspired by Angular in its features.

Nest.js has a simple interface, a moreover flexible usage base, and comparatively less downtime than most of the other similar options in the domain. It is compatible with Node.js servers as well as with JavaScript Libraries.

When You Should Node.Js

Data streaming. Considering its asynchronous nature, Node.js is also good for the real-time streaming of media, and streaming of data from various resources and apps that presuppose multiple file uploads. Netflix running on Node.js is a prominent example here.

API servers. Another good application of Node.js is for creating an API server. This is because Node.js allows handling many concurrent connections simultaneously and easily converting JavaSript objects in JSON format.

DevOps projects. As mentioned above, Node.js is perfect for writing fast and lightweight pieces of application – microservices – that allow development teams to build, deploy and maintain software at the same time. Continuous development and continuous integration are at the core of DevOps.

One thing trending in the Node.JS development services world is the greater use of GraphQL, a query language that accepts requests and delivers JSON responses precisely crafted to the query. It can work on multiple platforms and it can streamline workflow. It even has an edge over REST API. REST query calls endpoints that result in entire data at the endpoint being delivered which leads to over-fetching. You could have scalability and performance issues. GraphQL does what is required, no more no less. There are no speed bottlenecks with GraphQL. Further, since it delivers precise data you can expect analysts to deliver fine-tuned insights after analytics.

A highly advantageous feature of Node.js is that it eliminates factors like hardware and server maintenance from performance deciding factors.

This help to not only save cost but also reduce time and hence, enhance the efficiency and productivity of the developers as well as the organizations using the framework.

It has immensely improved the project quality, has highly reduced project costs, and has powered the flexible usage of the codes for the developers.

IoT may not be a buzzword as it used to be but it is still all set to play a significant role in the time to come and Node.JS is the perfect tool for IoT app development, in the hands of capable Node.JS development services. If you are going to use apps to control air conditioners, ovens, TV, lifts, or doors, you can bet Node.JS will be the platform powering the app.

For data-intensive and real-time IoT device apps, Node.js apps can service hundreds of servers. These real-time applications, however, have one disadvantage: they might cause server overload. The Event API and Web Sockets in Node.js allow the collaborative environment to update in real time. Trello is one of the most well-known examples of a web application that employs a real-time collaboration paradigm.

Mean includes MongoDB, Express, Angular, and NodeJS. MERN comprises MongoDB, Express, React, and Node.JS The combination is powerful and powers most web app developments currently. When you merge these two you have an even more powerful foundation to deliver apps that are full-featured and yet slim and trim in operations. If you are planning to launch apps in 2021, make sure your Node.JS development company is capable of these two-stack implementations.

Node.JS is a powerful, open-source, cross-platform JavaScript runtime tool built on Chrome’s V8 engine with quite a few features that put it in a class above competitors like React, .Net, Xamarin, and Spark. Developers favor it because of its ease of implementation and fast time to market. It has come a long way since Ryan Dhal created it in 2009 aimed at delivering single thread, event loop non-blocking I/O operations which it does admirably. Node.JS development services refine as they go along and you can expect the above trends to stay. Maybe new ones will emerge as the community discovers more and adds to the knowledge store.

Microservices provided by the Node.js framework are helpful in increasing the maintenance of the codes. It acts to support the serverless approach and shows great effectiveness in large projects.

The services are performance-oriented and can significantly impact the execution speed and scalability of the project. It also has a major benefit that only the part of the affected code needs to be changed rather than changing the complete coding structure.

Node.js is an asynchronous, single-threaded language. As a result, app developers can create applications that are both scalable and versatile. This is one of the most important contributions and most recent trends in Node.js development in the age of multitasking. App developers can now work on multiple jobs at the same time without interfering with one’s progress or efficiency.

This also makes it easier for app developers to make significant upgrades to their apps and reach a larger target audience. App developers can use Node.js to make significant changes to their apps without having to modify the entire app foundation. As a result, it is clear that Node.js provides a lot of versatility when it comes to designing apps and supporting multitasking, which is two of the most important features in the business.

The framework reduces logic replication highly and can be used by multiple applications.

The majority of cloud computing solutions benefit from what serverless has to offer:

Then next are some examples of top industries. That is use node.js and its amazing technology.

Did you know that Node.js is used regularly by 98% of Fortune 500 companies? Reasons? Lightweight, fast, and scalable. This JavaScript runtime built on V8 is also efficient in handling multiple requests simultaneously. It’s more time- and cost-efficient than other tech stacks to handle the traffic of your application.

Tecoreng is the best Node.js development company. And they try to understand an advanced guide to node.js development. So, your search end here book your call now with our experts and Let’s build some together!